Heidi's Heroes | Woods on Water – they’ve done it!
Heidi’s Heroes is a Cheltenham-based charity that provides practical support, care and courage to people of all ages across Gloucestershire when they need it most.
heidis heroes, cheltenham, swimming, heidi wood
494
post-template-default,single,single-post,postid-494,single-format-standard,ajax_fade,page_not_loaded,,qode-theme-ver-6.6,wpb-js-composer js-comp-ver-6.7.0,vc_responsive 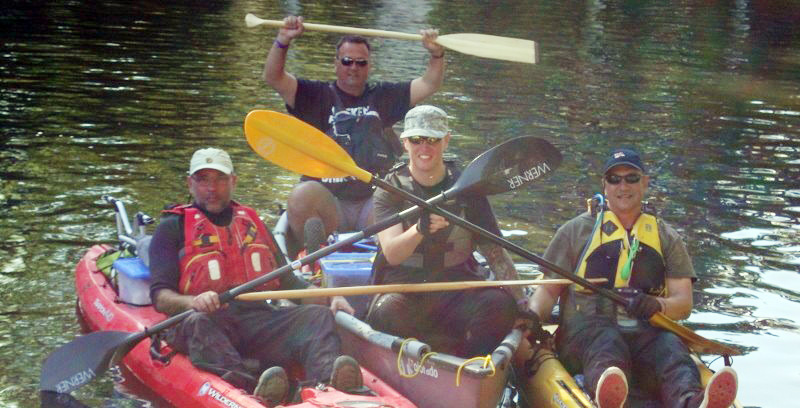 Posted at 15:51h in General by HeidisHeroes

THEY’VE DONE IT!!! Our four Heidi’s Heroes have successfully completed the Woods on Water Thames Challenge. Paul, Tom, Richard and Malcolm were greeted by friends and family as they crossed the finish line at Teddington Lock on Thursday afternoon, October 1st, 125 miles, 48 locks, six sunny days and five chilly nights after leaving Lechlade. Donations are still coming in, pledges still to be honoured but to date the Woods on Water Thames Challenge has raised more than £5,000 for Heidi’s Heroes. Paul was given a big welcome hug home from his mum Janet and daughter Millie who both travelled to London to welcome the team when they finished at Teddington Lock. After the obligatory team selfie, the fundraisers signed the bottom of Richard’s kayak in tribute to Heidi.
Paul Wood, who set up the charity in 2013, said: “It’s been a great six days, very hard at times and tiring, but also a great achievement. I’d like to say a huge thank you to Tom and Richard for taking part and to our trusty guide and fellow kayaker Malcolm Clarke.Thanks also to everyone who has helped and supported us during this challenge, and to all those who have so generously sponsored us, it makes all the hard work worthwhile. I know Heidi would be very proud.”